The thing about doing a big car maintenance job like a timing belt change is it tends to expand due to "while I'm in there" syndrome. It starts with, "while I'm in there, I might as well replace the water pump too." And then, "while I have the valve cover off, I might as well set the valve clearances." And then you notice the spark plugs you took out look kinda worn, and maybe a new valve cover gasket would be a good idea, and oh yeah the rubber in that engine mount you took off to get to the timing belt looks pretty hashed...

I recently acquired an interesting radio from my late grandfather's estate. 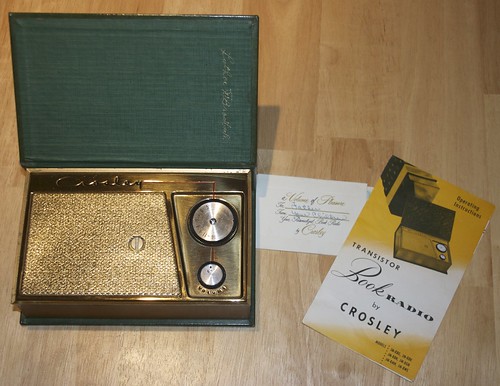 This is what collectors would call a "novelty radio" -- it's a battery-powered portable shaped like a book. Made in the late 1950s, the instruction sheet proudly declares it to be a TRANSISTOR radio, but it's actually a tube/transistor hybrid, with three subminiature tubes and two transistors.
( Collapse )
So does it play? I don't know yet. As was typical for tube portables it takes a high-voltage "B" battery, in this case 45 volts, and a 4-volt "A" battery for the filaments. These are no longer made and modern equivalents wouldn't fit in the case; however, I may power up the bare chassis at some point just to see how it does. The set appears to have been used at least once but, like a lot of tube portables, doesn't appear to have seen much use.

Decided to stick the punch lists for the two cars up on Trello, so I wouldn't have to keep track of the little scraps of paper I'd written them on before. here they are, if anyone's curious. The Honda's is longer mostly because I just got it and have to take care of maintenance items that may have been deferred by the previous owner.

After working on the Mercedes diesel, there's a certain difference in scale with the Honda that's sometimes startling. Today I was looking up how much coolant I needed to flush and refill the cooling system. I was thinking in terms of "how many gallons?" -- the Mercedes takes 11 liters, almost 3 gallons. The Honda's capacity turns out to be...four quarts.

Took the Del Sol in for new tires and a wheel alignment yesterday, those being two jobs I simply don't have the equipment to do myself. The alignment was slightly out, which explains why the car had a mild pull to the right; it will happily track arrow-straight with my hands off the steering wheel, now. I also took it through a carwash, and was gratified to find no leaks from the targa top. These cars have a reputation for being leakers but mine seems to have good seals. I have a minor squeak from the top when the body flexes; I need to pick up some of the special silicone grease Honda sells to lube the seals.

Today I rotated the tires on the Mercedes. Normally I'd leave that to a shop, too, but I wanted a good look at the brakes and suspension. Everything seems okay except that the left inner CV joint boot split clean in two when I jacked up the back end, so now I get to add "new drive axle" to the to-do list. Whee!

This recipe was born when I wanted to make granola bread, but didn't have any granola and decided to try a different cereal. It's very tasty toasted or as a base for breakfast sandwiches.

About two days ago I noticed the Del Sol had started making an odd, chattery, rattling sound at certain speeds and throttle settings. It was intermittent, and the sort of thing you really couldn't hear well unless the stereo was off. I couldn't duplicate it by revving the engine in neutral. It bothered me because I couldn't identify it. Today I inspected the engine bay (again) and finally noticed that the center bolt on the left engine mount had backed out most of the way, letting the engine drop slightly lower on that side.

Fixing it was a simple matter of jacking the engine up to take the weight off the bolt and tightening it back up. One minor complication was I found the car was too low to get my floor jack under the oil pan; I ended up using the tire-changing jack instead, because it's a scissor jack and collapses down a couple inches thinner than my regular floor jack.

My original reason for being in the engine bay was to confirm the engine number, so I could order a timing belt kit. I'm going to take on that job in the next few weeks, since it appears to be due. I'm going to replace the tensioner and water pump as well, as long as I'm going to the trouble of getting in there.

The epoxy repair to the window clip was a success. I reassembled the window regulator, adjusted the window height so it met the weatherstripping properly, and reassembled the door. The window works great now, and there's no more wind noise. I'm rather pleased with myself for getting that fixed, considering I don't have a shop manual yet. The only piece I seem to be missing is the speaker grille.

Dug a bunch of wet paper and such out of the trunk — it seems to have a leak, probably around the antenna. Put air in the donut spare, which was flat. I'm missing the tool kit and jack handle; I had a replacement in my junk box for the latter but I'll need to buy a lug wrench to carry in the car. Reassembled the trunk liner and fixed the trunk light. I had

bluerain close me in the trunk for a moment so I could see if the light went out properly with the lid closed. (It's surprisingly roomy in there!) I'm guessing I'll probably never utter the words "I need you to lock me in the trunk" again. ;)

A couple days ago I bought a 1994 Honda Civic Del Sol. This will be a replacement for the '88 Cabriolet, which was always a stopgap car and which has some issues I don't really want to put money and effort into fixing. The Del Sol is high mileage but seems to have been very well cared for; it runs and drives beautifully and was faithfully dealer-maintained for most of its life. It's also utterly stock, a rare thing on a used Civic these days. It sits on factory alloys, at its original ride hight, has a proper muffler, and there's nary a blue LED in sight. Practically an endangered species.

Today I set out to fix one of the few small problems the car has -- the passenger side window doesn't work. The previous owner thought it needed a new motor, and actually started to disassemble the door card before deciding he was in over his head. I took the door the rest of the way apart, and found that the motor and window regulator mechanism were fine; instead, one of the clips that holds the window to the regulator had broken, and the other had separated, leaving the window still on its track but otherwise adrift inside the door. The broken clip looked like a good candidate for gluing, so I put it back together with epoxy and I'm letting it sit over night before I reassemble the window and regulator.

The driver's side window was slow, so I took that door apart too, and greased up the window guide tracks.

After reassembling that, I called

bluerain down to the garage and we took the roof panel off for the first time (and probably the last time before spring.) It's surprisingly light and really no problem for one person to handle, although the bulk of it is slightly awkward. The holder for it in the trunk is pretty clever and leaves a useful amount of trunk space available with the roof in place.

Normally I'm not a big fan of meat substitutes, but some of them can work well in certain situations. One of the more successful ones is vegetarian "bacon." Eaten by itself it's not so great, because the mouth feel is wrong, but as an ingredient it can be pretty successful. Tonight I tried using it to make spaghetti carbonara.

All the quantities below are approximate; I didn't actually measure anything.

Cook the spaghetti per usual. While it's cooking, microwave the bacon strips until they're just short of crispy -- about a minute and a half did it for me. Tear the cooked bacon strips into little shreds.

Melt the butter in a big skillet over medium-low heat, and add the olive oil. At this point you could also add chopped garlic, sage, or anything else that suits your taste. Dump the drained spaghetti into the skillet, then add the eggs and the bacon pieces. Stir until the egg has coated the pasta, then cook until the egg starts to set up -- this only takes a couple minutes, and it will continue to cook after you take it off the heat, so don't overdo it. Serve topped with parmesan cheese.
Collapse